Kim Witman of the Wolf Trap Opera Company is celebrating today’s announcement of the WTOC 2010 season by doing guest blog posts and interviews in a few places across the blogosphere. Link back to Kim’s blog at www.wolftrapopera.blogspot.com for a complete list – all of the links should be active by midday on Tuesday, February 9.

Rossini’s Turk in Italy had a rough start. Just the year before, Rossini had a huge hit with an opera called The Italian Girl in Algiers. The set-up was simple enough: culture clash and comedy ensue when an Italian bombshell is washed up on the southern shores of the Mediterranean. Italian Girl was written for Venice and was a wild success. When Rossini decided to turn this plot device on its head and write a new opera about a Turkish prince who finds himself in Naples, he was obviously planning on cashing in on the popularity of its prequel.

Well, audiences in Milan (where Turk was premiered) didn’t agree. They must’ve felt as if they’d been fed an imitation of the original opera seen in Venice, and they were (as Italian audiences tend to be) pretty vocal about it. It’s a shame, for Turk is in no way inferior when experienced on its own. Nevertheless, it has spent most of its life eclipsed by the popularity of Italian Girl. 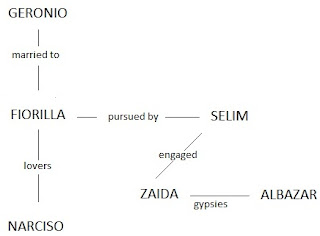 I love drawing little diagrams that describe the relationships between operatic characters. (I do the same things for books of fiction with insane multi-generational character lists.) Selim is the Turk, and he’s only one of the three men involved with the lovely Fiorilla. (One of those three is Fiorilla’s husband…)

Stendhal tells a great story about the Turk performances at La Scala with the legendary buffo singer Luigi Pacini, who created the role of Geronio, Fiorilla’s cuckolded husband. It seems that there was a certain celebrity (a Duke, I think) whose wife was famously cheating on him. Pacini thought that it would be entertaining to incorporate some of the Duke’s recognizable gestures and mannerisms into his characterization of Geronio. According to Stendhal, the audience was quick to catch on, and the poor guy (who was watching from his box seat, with his cheating wife) was made a laughing-stock.

We probably won’t get involved in celebrity gossip during our production, but a good time will be had nevertheless. One of the great things about Turk is that there’s a character (the poet Prosdocimo) who breaks down the fourth wall and provides an entertaining bridge between audience and players. Add Rossini’s trademark vocal fireworks and high-energy ensembles, and you’ve got a wonderful night in the theatre.