Why I do this

Today I was at a lunch for all of the Honor Scholars preparing their final theses, and the faculty who are on their defense committees. The faculty member in charge of the Honor Scholar program gave a wonderfully funny and passionate description of the process, reminding all of us that the defense is an opportunity for a well-informed group of people to sit and talk for 2 hours about a subject that they care about. This is what I want all my classes to be like, a conversation that helps everyone involved to learn more about subjects we love. Unfortunately enough of my students don't like the subject, or haven't prepared enough to contribute in a meaningful way, that I don't often get that rush. I suppose that is the true joy of teaching graduate students. After all, I had many deep conversations with fellow students and with my professors when I was in graduate school. We had the time to study the one discipline that we cared about. We had the broader knowledge base from our undergraduate studies to apply to the conversation. And we all loved academia. I'm looking forward to this intense conversation about creative writing as an analytic response to music, learning at least as much as I teach during the process. That is why I do this.
Posted by Scott at 1:05 PM No comments:

Email ThisBlogThis!Share to TwitterShare to FacebookShare to Pinterest
Labels: academics

Inspired by Chad, I've created my first-ever tournament bracket. I know nothing about basketball, so I picked those schools with the best ranked graduate music programs. To be honest, I'm a little shocked at some of these rankings, but I'll use them. Using the same rules as Chad, a school with a ranked grad program beats an unranked school. If both schools don't have a ranked music program, I picked the higher seed (I know that much about basketball). Here are my results, click on the picture to make it bigger: (I just noticed an error, California should really be beating UNC by the ranking system. I must have clicked the wrong school at some point in the process.) 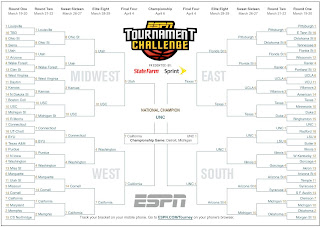 Let's see how I do, especially against my brother-in-law and nephew (I'm looking at you, Hugh!)
I should point out that one of my alma maters is actually in the tournament this year, the University of Akron. While I will cheer for the Zips, I doubt they will fare any better through basketball skills than my bracket predicts. I do have some fond memories of playing in the pep band, particularly because I got paid to do so.
Posted by Scott at 1:24 PM 5 comments:

Email ThisBlogThis!Share to TwitterShare to FacebookShare to Pinterest
Labels: personal

Can you feel it?

He just couldn’t keep the beat, unlike everyone around him. Did they clap on the beat or off the beat? He couldn’t remember. Not that that would make a difference. It was supposed to be natural, not something to be analyzed. Heck, babies prefer bouncing on the beat, and can even recognize things off the beat when they are newborns. He was a baby once, surely he preferred bouncing on the beat back then. So why was he unable to find the beat now? Had he lost something, repressed something, damaged something? Maybe his brain didn’t work right. But he had just read that therapists were using musical rhythms to retrain stroke victims how to walk. These people are brain-damaged, and yet they can feel the beat! And he had always been healthy, no brain traumas or drug use. Maybe he was born defective, he thought the term was congenital amusia. Like being tone deaf. Che Guevera couldn’t tell the difference between fast dances and slow dances. He had read a story about Guevera telling a friend to signal him when the band played a tango, so he could dance with the girls. A miscommunication made Guevera start tangoing to a fast shora, and he didn’t realize until everyone else started laughing. Isn’t that just another case of not finding the beat? But that wasn’t at all the same as his problem. He knew that he wasn’t on the beat. He could recognize when the music was fast or slow. So why couldn’t he clap along with it? He was told to relax, to let the music wash over him. Let his body move to the music, don’t make the body move to the music. But he had never been encouraged to lose control when growing up. “Act your age.” “Don’t cry about it.” “Keep your hands to yourself.” “Stop fidgeting.” “I don’t want to hear about it.” “Don’t be such a weenie.” “Aww, are you going to cry?” His parents, teachers, and friends had expected him to be controlled, rigid, manly. Boys who didn’t control their bodies were goofballs, spazzes, emos, or jerks. Never once was he encouraged to get in touch with his emotions, except for some girlfriends, and they definitely wanted him to keep his body under control. He wasn’t sure whether the root problem was that he kept his body from expressing his emotions, or if he prevented the music from sparking emotion within him. He wasn’t even sure if there was a difference between the two. Did the emotion create the motion, or did the motion create the emotion? Hey, that was kind of like a poem. Something with a rhythm and flow. Maybe it wasn’t too late to let go. Maybe he could react like a baby. Maybe he could find himself.