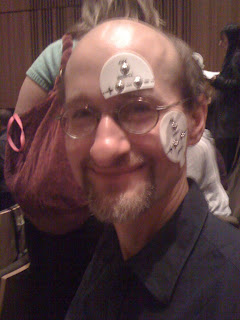 I had planned to post some observations during the conference itself, but I was too busy either attending the conference, or socializing with people from the conference. Now that I'm home, I have (some) time to socialize with you, my internet companions. First off, I took part in my first biosensor experiment. On Halloween night, I was wired up with electromyography sensors on my frowning and smiling muscles in my face, with a pulse cuff and galvanic skin response sensors on my left hand, and a respiration monitor around my chest, providing an awesome Halloween costume. I and my fellow biosensor participants were treated to a live concert of three pieces – a madrigal by Arcadelt, a movement of a Schumann string quartet, and a new piece for an electronic instrument (the T Stick) that involves dramatic movements by the performer – while our physiological responses were recorded. Another group of participants at the same concert/experiment were asked to indicate their continuous emotional states in two dimensions – arousal and valence – on specially programmed iPods. Afterward we saw results from previous iterations of the experiment and discussed our reactions to the experiment. This was all hosted by CIRMMT.

I saw two very interesting papers on Copland's Quiet City for trumpet, english horn, and strings. Both papers discussed the shifts in diatonic collections within the piece, though one paper focused more on a system with a dialectic between fifths and half-steps to discuss the dramatic points, whereas the other paper worked on identifying the most stressed pitches, thus a sense of key for the different structural divisions. I disagree with both presenters about the most salient pitch at the opening, but appreciate many of the points they each made.

I'm tempted to read Proust after seeing a paper that explores a narrative of Debussy's instrumental music based on Proust's conceptions of time and memory. The three machines of the "Proustian narrative" are memory, eternity, and crisis, which the author (Michael Klein) identified in key moments of Reflets dans l'eau and the Cello Sonata.

I learned how to part-write Shape-Note hymns from a paper by Robert Kelley. He explained how the harmonic tradition of Sacred Harp music differed from standard harmonic practices, and developed a means for teaching the different way of harmonizing.

I'll finish with a brief description of the keynote address by Susan McClary, entitled "In Praise of Contingency: The Powers and Limits of Theory." Professor McClary is most-known as the author of polemic books such as Feminine Endings that explored how gender bias had influenced musical scholarship. She often beat up theorists for not considering social contexts enough when describing musical structures, so many of us were apprehensive about what she would say. Her speech was great. Funny, erudite, featuring the goblin who strides across the universe as a fitting Halloween topic. In the end, her talk was about a difficulty that was demonstrated in the experiment I described at the beginning of this post. Musicians are very good at performing emotions, but we are not good at describing, or even being conscious of, the emotions we feel when listening to music. Those participants with the iPods had difficulty remembering to move their fingers to indicate shifts in emotion, or to even be able to translate what they were feeling to the two dimensions of arousal and valence. Likewise, Susan McClary described how resistant people are to facing the goblins created by Beethoven's music, that the powerful emotions created are too strong or scary to be clearly identified, much less be analytically described.
Posted by Scott at 3:07 PM